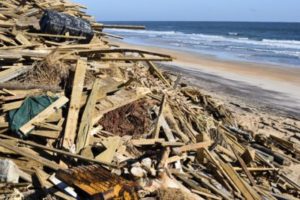 There are a lot of words being used to describe Hurricane Harvey and its aftermath; unprecedented, historic, catastrophic, one-in-500, one-in-1000, costliest natural disaster in US history. You get the idea; Harvey’s devastation was massive and on a scale that is hard to wrap our brains around.

I even heard one stat that said we’ve had 10 1/1000 year events in the past 8 years. Doing a quick Google search, I couldn’t find a list. While a list might be helpful visual aid, we certainly know that these events are becoming more frequent. (A Google search will show you that.) Houston has had three 1-in-500 year floods in as many years.

Since this type of measurement depends on the probability of the event happening, maybe it’s time to rethink that probability. If there is a 1/1000 year event (that’s 0.1% chance of happening in a given year), but then there are several such events in successive years, is this just an anomaly or a new climate normal?  Not so coincidentally, 16 of the hottest 17 years on record, have occurred since 2001. The hottest year of all was last year, 2016.

I’ve heard Al Gore say many times, watching the TV news has become “like a nature hike through the Book of Revelation.” Audiences always chuckle, but it seems like this is our new reality.

As with most realities, you can choose to deny, look away, or ignore, but you do so at your own peril. Collectively we do this at our peril. We can only solve a problem by addressing its cause. Sometimes, looking at a cause of a problem can be uncomfortable, because we know that we have to change. To stay the course by taking the path of least resistance might be easier in the moment. Change can be difficult and scary but It also can be necessary and liberating. Real evolutionary leaps come in times of disruption.

The cause of our changing climate is the carbon dioxide and CO2 equivalent gasses that we continue to spew into our atmosphere; 90 million tons every 24 hours.

This leaves us with three questions:

Must we change? Yes. The science and impacts of our current course are well documented and the chaos and suffering from the status quo will continue to be overwhelming.

Can we change? Yes. The solutions are here now.

Will we change? Yes. We, in fact already are changing, but we need your help to get us across the finish line.

– Ask your mayor or local elected officials what they are doing to address climate change and get involved.

– Ask your child’s school principal or administration what they are doing.

– Start a ride share program at school or work.

– Create climate conversations with your friends and colleagues.

– Call, tweet, write your elected officials. Show up at their town halls.