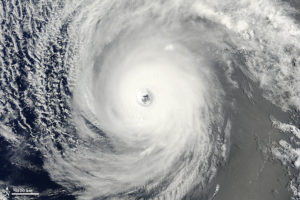 When I left Florida five years ago, hurricanes weren’t high on my list of reasons why. It was more the rat race; the traffic, the cost of living, the apathy, and oh yeah, no more hurricanes.

Living in South Florida for over twenty years, I’d seen a lot of hurricanes. Most notably was Hurricane Andrew, a cat 5, that hit Miami in 1992. Before the days of cell phones, it took several days to get word that our friends and co-workers in the southern part of the county were safe. Many of them lost their homes.

I remember hugging one of my co-workers a week after Andrew, as I listened to her story. We were both crying. My friend told me that her house shook with the roaring winds. Yes, hurricane winds do sound like a freight train. She thought they would all die.

Hurricanes teach us a lot

I’ve witnessed the destruction of a category 5 storm. Standing there with everything laid bare, it looks like you might imagine the aftermath of a bomb would.

Hurricanes teach us that stuff doesn’t matter. Our stuff can all be gone in matter of minutes. In the end, none of it gave us joy anyway. Our stuff is not memorable.  It’s not even close to remembering good conversations and meals with friends, kindnesses from strangers, or smiles and hugs.

Hurricanes also teach respect. Respect for Mother Nature. When it comes down to it, being the mammal walking around with the big brain does not give us dominion over nature. We need to live within nature’s laws of physics and chemistry.

I’ve heard so many times “we can’t link one weather event to climate change.” It seems cliché. And, it’s also an excuse for inaction. It’s a way to avoid the truth that we are causing the problem. Thus, we must change.

Yes, hurricanes and floods were part of the natural system before humans began shaping their landscape, but we’ve turned up the heat.

There is plenty of science to link hurricanes and extreme weather to human caused climate change. Below are a few facts .