In nature, waste from one species is food for another. That’s a good rule to ponder and an especially good one to follow. One way to close the loop on food waste, is to add worms to your life.

My absolute favorite composting worm bin system is by The Worm Factory. Because life is busy, and I like to keep it simple. The worms eat their way up through the compost one tray at a time, leaving behind worm castings for your garden.

The Worm Factory Worm Composter unit comes with a helpful guide that tells you how to set it up, some interesting facts on vermicomposting, the anatomy of worms and a troubleshooting section. It also includes all the bedding that you need to get started. This makes it an ideal unit for beginners.

Although there are many different species of worms, the red wigglers are ideal for a worm compost bin. They love darkness. Some species of worm like light and will escape your worm bin if there isn’t sufficient light.

As a side, on a recent trip to Costa Rica, I visited a fair-trade coffee grower.  Although his farm was natural and completely sustainable, he had imported his red wigglers from California because red wigglers are the best compost companions. A website that the guide recommends is Find Worms.com. 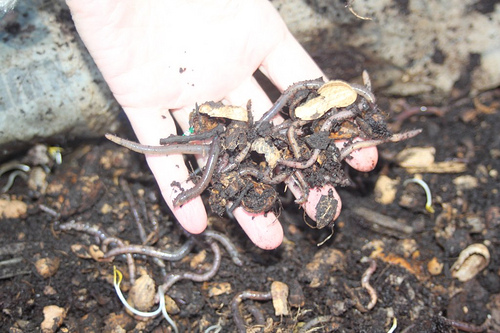 Every three months, the red wigglers in this composter can double in population.

Each tray in this vermicomposter system can hold three pounds or 3,000 worms.

Red wigglers require moisture to breathe because they  take in oxygen through their skin and will die if they dry out. Too much moisture and the worms can drown.

Moisture should range from 60%-80% in your bin. An easy way to test moisture is to squeeze a small amount of the bedding between two fingers. You want to see a drop or two of water. It should be as wet as a wrung out sponge, damp, but not dripping wet.

Worms can eat three times their weight in a week. So one pound of worms will consume three pounds of waste and organic fiber in a week.

The Worm Factory can go both indoors and out (if you live in a warm climate). If you are keeping worms outdoors keep them in a shady area. Make sure the worm bin is protected from the rain. The optimal temperature range for your worms is from 60˚-80˚F (15˚-26˚C).

Since I now live in a climate with four seasons, I keep my bin in my garage year round.