Your Carbon Footprint At the End of Your Fork

Yikes! My Food Has a Footprint Too

This week, my son and I visited the New Mexico Museum of Natural History and Science. As part of an exhibit, “Degrees of Change“, visitors can select items from a menu and calculate the carbon footprint of their meal.

Ian had a great time checking out the footprint of various foods. According to the exhibit, a carbon-intensive meal is one that puts out over 2000 grams of CO2 into the atmosphere. You might be surprised to find out that yummy beef filet alone puts out 4000 grams of CO2. 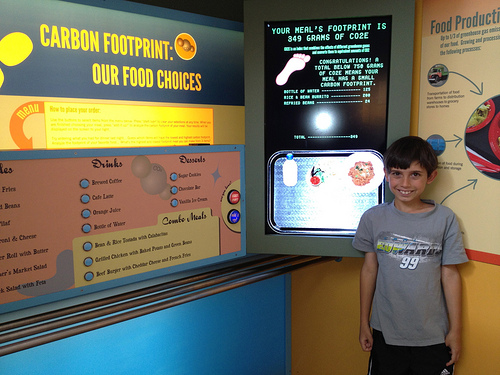 When we think about our footprint, we should also consider the hefty water component of our carnivorous cravings. According to Hoekstra and Chapagain, it takes 2400 litres (over 600 gallons) of water to produce one hamburger.

Today, modern humans are watching the rapid melt of glaciers from warming temperatures. In a world that has only a 3% supply of fresh water, we are pumping ground water aquifers at a faster rate than Mother Nature can replenish them. And, the pollution of existing water supplies is happening at almost warp speed. You might wonder why intelligent people don’t ask, “is how I eat really sustainable?“.

Alternatives to the Standard American Diet

There is no question that industrial agriculture has an enormous footprint and the existence of CAFOs with their great shit lakes are not sustainable for the planet.

Small farmers raising their cattle or chickens in a more holistic way, like Joel Salatin of Polyface farms, are far better for the health of the planet. But can the earth really support 7 billion or more humans eating a locally-raised organic meat-intensive diet? That answer is probably no.

While this post is not advocating you become a vegan or vegetarian, I suggest you check out some cool ways to decrease your meat intake like Meat Free Mondays. Or opt for only eating meat once a day, like Lance Armstrong. Armstrong says his mostly vegan diet has brought him increased energy, and he saw a significant difference after the first month. That sounds like it could be a good place to start. And, this might just serve as a gateway drug to a different way of eating.

Personally, I stopped eating meat because of the factory farming. What I discovered was that I felt a lot better without it. And, I never missed it much. I think for most people meat is the path of least resistance. In the beginning, it can be difficult to find alternatives. But, most likely, when you do, you won’t regret doing without.